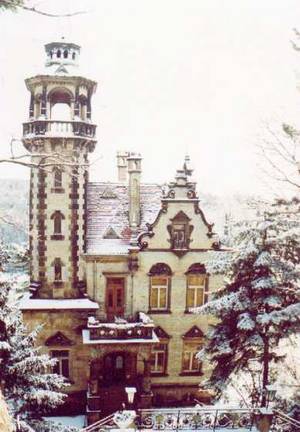 Immediately after the release of John Noble on the 11th of January 1955, a press conference took place, which caused a sensation among the world public, but also tremendous anexiety among the Russians. Shortly afterwards, on the 19th of January 1955, articles were published in the relevant daily newspapers of East Germany penned by the Governor of Saxony, Max Seydewitz, later on also by his wife Ruth. In this publications, for the first time, the defamatory statement was made that Charles Noble directed the air raids on Dresden in 1945 from the balcony of his villa "San Remo". With this the family was most viciously villanized. The intention behind this was to discredit John Noble's reports about the Russian camps.

In his nine years of imprisonment John Noble saw the true face of Stalinist Communism and started to report about it. The East German propaganda had to come up with something and so the "Noble Legend" was born. In his book "The Invincible City" Max Seydewitz manifested his idea to depict the Nobles as American Monsters, who had happily and joyfull watched the destruction of Dresden.

During the time of the communist regime in East Germany, a brass sign attached to the gate of the villa San Remo announced the atrocity of the Nobles. It become part of the history lessons at scool and still today one can hear some Dresden guides telling about it.

Abstract from the book "Banished and Vanished"